Tucker Carlson: Bernie Sanders is losing because he’s weak. He may be the lamest revolutionary ever 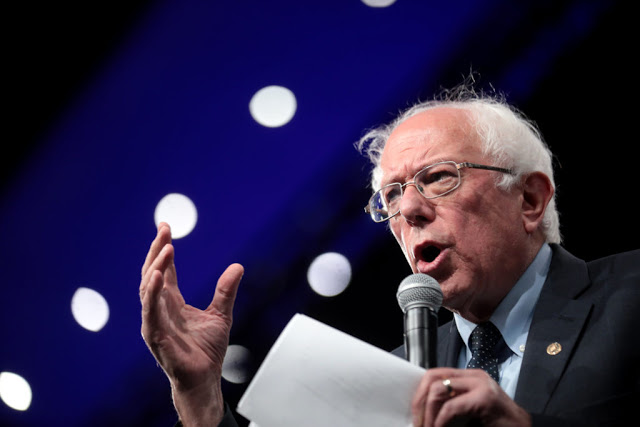 By
Democratic presidential candidate Bernie Sanders may be socialist bomb-thrower who praises Fidel Castro, but it’s mostly talk.
It looks like this could be Sanders’s last stand. As of Wednesday morning, fully half the delegates of the Democratic race will have been awarded.
Sanders’s path to the nomination is essentially disappearing. If that happens, millions of Bernie supporters will be outraged and disappointed. They’ll believe Sanders had the nomination stolen from him by a ruthless Democratic establishment fearful of change. And to some extent, they’ll be right.
But there’s another important reason that Bernie Sanders appears to be losing: He’s weak. Yes, Sanders is a socialist bomb-thrower who praises Fidel Castro. But it’s mostly talk in the end.
Underneath it all, Bernie Sanders may be the lamest revolutionary ever. Twice in a row, Sanders has tried to win the Democratic presidential nomination. Twice in a row, party insiders have worked to rig the game against him.
In 2016, leaked emails showed Democratic officials openly rooting for Hillary Clinton, his opponent. The party scheduled the primary debates that year in a way they thought would hurt Sanders. The DNC even entered into a joint fundraising agreement with his opponent, the Clinton campaign. Remarkable. The Democratic Party did far more to subvert the democratic process four years ago than Vladimir Putin even attempted to do.
Sanders was never going to win. When he finally did lose, Sanders did not even complain about it. He dutifully showed up at the Democratic Convention and endorsed Hillary Clinton. When the extent of her treachery became clear in those leaked emails, Sanders still campaigned for her, like the obedient little party hack he is.
But Hillary was not even grateful for it. She bashes Sanders extensively in a new documentary and not just his policy. She goes after him personally, claiming nobody likes him.
So what did Sanders learn from all of this? Not a single thing. A week ago the entire Democratic Party coalesced with stunning speed around Joe Biden. You’re watching the results.
It’s not as if the establishment actually prefers Biden, who is frail and rapidly moving toward incapacitation. They just despised Bernie Sanders and were desperate to stop him. They’d pick anybody and they did and it worked. Sanders got crushed on Super Tuesday.
A candidate who actually wanted to win would have paused the day after to reassess his campaign. For Sanders, this week was the time to tell the truth about what is happening, while we’re all watching. The Democratic nominating system is rotten and corrupt. Biden himself clearly is not capable of governing this country. He is not even capable of holding a press conference.
The whole process is shocking. It’s a fraud, not to mention incredibly cynical and reckless. The establishment doesn’t care who the president is. They just want to make certain it’s someone they can control who won’t raise their taxes.
Sanders could have said all that, and he should have because it’s true. Instead, he defended Joe Biden.
Okay, so according to Bernie Sanders, we’re not allowed to talk about the one thing all of us can see clearly every day — the Democratic front-runner is failing. He’s not capable of taking the job he is running for.
His staff is desperate to keep him from interacting with the public for more than two minutes. By the way, it’s not a partisan talking point. It’s true. It’s an observation that everyone who pays attention has, and it’s sad, really sad. More poignant than damning, sincerely.
But Sanders won’t say any of this. Shut up, he says. Any mention of Biden’s rapidly declining communication skills is a “personal attack.”
It’s pretty obvious that Sanders doesn’t want to win. He’s a man who thinks it’s more noble to fail than to succeed. You’re watching a professional loser.
Sanders is all but admitting that now. He has already promised to back Biden if Biden wins the nomination. He’s even pledged not to contest the convention if Biden falls short of a delegate majority.
“Oh, absolutely,” says Bernie Sanders. Absolutely. It’s pathetic, actually.
Real revolutionaries go to the wall for what they believe. Bernie Sanders won’t even go to the convention, because that’s who Bernie Sanders is. And that’s who he has always been.
Back in 2015 at a rally in Seattle, two demonstrators took the mic from Sanders while he was trying to speak. Rather than take back his own podium, Sanders stood meekly aside like a scolded child, and then he called off the event altogether without even finishing his speech.
Imagine doing that yourself. Imagine how much self-loathing you would have. Would your kids even look at you in the face? Probably not. But he kept doing it.
Less than two months ago, one of Sanders supporters did what he wouldn’t do — she told the truth about Joe Biden. She called him corrupt, and she did it for a reason. For decades, Biden was a paid lackey of the credit card companies.
But Sanders wouldn’t play along. He apologized for what his surrogate said. And then he claimed Joe Biden was ethically pure. Sanders attacked his own surrogate for telling the truth.
So what did Sanders get in return for doing that? Well, more attacks, of course — you could have guessed it. His opponents continued to denounce him and his supporters as sexist and bullies and losers. And they’re still doing it, and they’ll keep it up onto the generations because personal attacks are what they do best.
Where’s Bernie in this? Secretly enjoying it all. Losing proves he is ideologically pure. He wants to.
We just feel sorry for his voters. Some of them thought this was a real campaign. The joke is on them.
Adapted from Tucker Carlson’s monologue from “Tucker Carlson Tonight” on March 10, 2020
https://www.foxnews.com/opinion/tucker-carlson-bernie-sanders-losing-weak-lamest-revolutionary

NAMM 2020: ‘I Will Survive’ singer Gloria Gaynor talks faith (really) and the power of women ahead of She Rocks Awards