Tucker Carlson: Trump is a ‘truth elixir’ and Bill Kristol is a ‘Trotskyite’

On Wednesday, Cockburn stopped by ‘Sovereignty or Submission: Restoring National Identity in the Spirit of Liberty’, hosted by conservative publications American Greatness and The New Criterion at a private club in Washington. Cockburn heard a wide-ranging discussion about nation states and governance, featuring Spectator columnists Daniel McCarthy and Roger Kimball, as well as the Hoover Institution’s Victor Davis Hanson, the Heritage Foundation’s David Azerrad, American Greatness editor Chris Buskirk, National Review’s John O’Sullivan, and Hillsdale College and Claremont Institute fellow Michael Anton. Over lunch, Tucker Carlson delivered a keynote speech on what he has learned since Trump’s election. The Fox…

A Threat Is a Threat, Sen. Schumer 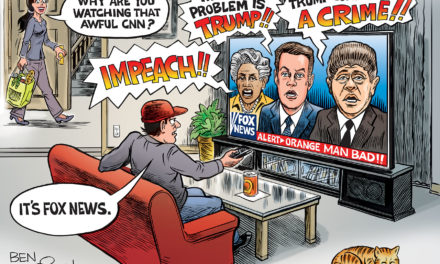