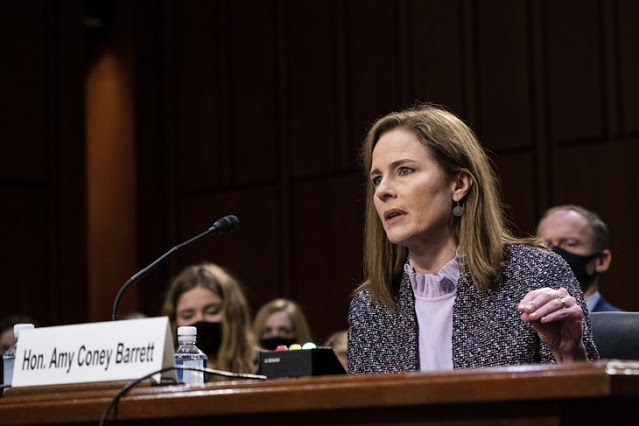 “We did it! Judge Barrett is going to the floor,” Senate Judiciary Committee Chairman Lindsey Graham (R-S.C.) announced following the vote to send the nomination of Judge Amy Coney Barrett to the full Senate.

Democrats on the Judiciary Committee threw a hissy fit and didn’t even bother to show up for the vote on President Trump’s Supreme Court nominee, therefore the vote was unanimous in favor of advancing Barrett’s nomination. In a ridiculous stunt, Democrats on the committee filled their seats with human props— posters of people Democrats falsely claim will lose their healthcare the minute Barrett is confirmed to the Supreme Court.

Sen. Mike Lee excoriated Democrats for their “judicial culture wars” and appalling behavior toward Republicans’ nominees in the past, beginning with Judge Robert Bork and most recently with Justice Bret Kavanaugh. Lee noted that while Democrats have gone “cruelly, disgustingly low” in nomination after nomination, “Republicans took the high road.”

“Hubris makes the powerful deaf as well as blind,” said Lee, describing the Dems’ tactics as “idiotic knife fights” rather than thoughtful debates.

“Now they’re trying to scuttle this meeting for political purposes,” he declared. “The left seems to think that the Supreme Court exists to advance their worst ideas” and “to tell everyone how to live” by appealing to the courts when they lack the votes to pass their agenda.

Graham commended his Democratic colleagues on the committee for not turning Barrett’s hearings into a three-ring circus. “You pushed her hard, but you didn’t go too far.”

He warned that Democrats are “Hellbent on changing all the rules,” including packing the court, getting rid of the legislative filibuster, making the District of Columbia a state, and instituting some version of socialized medicine. “But that’s for the ballot box.”

I’m proud to have supported Judge Barrett,” Graham concluded,  “the committee did the right thing.”

A vote is expected in the Senate on Monday.