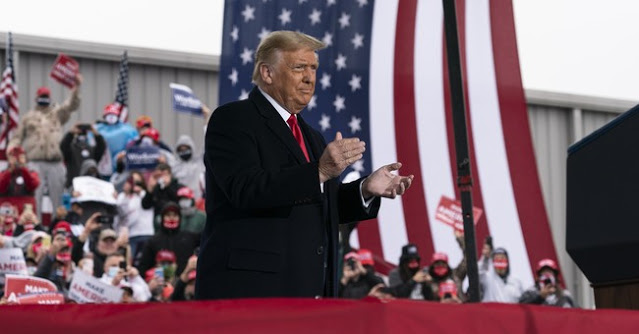 President Trump rallied Georgians on Saturday and encouraged Republicans to vote in two Senate runoff races that will determine which party controls the upper chamber of Congress.

“You have to get out, you have to vote, you have to make sure you have every vote counted,” the president said, before detailing some of the alleged issues impacting his own election in the state.

Control over the Senate has taken on extreme importance for Republicans worried about Democrats having control over both Congress and the White House. Democrats have threatened to pack the courts, end the filibuster, grant statehood to D.C. and Puerto Rico, and would likely pass the Green New Deal and other crippling legislation if given the chance to do so.

The president said he remains committed to pursuing legal challenges regarding the Nov. 3 election, telling rallygoers that he will ultimately emerge as the winner of the presidential election. The president also said Democrats will attempt to cheat in the upcoming Senate runoffs.

“And they’re going to try and rig this election too,” said Trump, as the rally chanted “stop the steal!”

President Trump has been critical of Georgia Republican Gov. Brian Kemp’s and Sec. of State Raffensperger’s reluctance to aggressively pursue claims of voter fraud in Georgia. On Saturday, the president repeated his calls for a signature audit of ballots in the state.

Gene-edited cattle have a major screwup in their DNA

MSNBC’s O’Donnell: I Apologize for and Retract Trump Loan Story