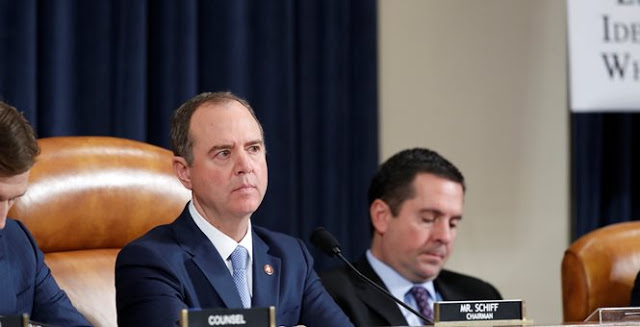 By Matt Vespa | Toenhall.Com
Source: AP Photo/Alex Brandon
Rep. Adam Schiff (D-CA), high Chancellor of the Trump impeachment effort, might be getting away with murder. The impeachment circus that has engulfed D.C. has overshadowed the House Intelligence Committee chair’s egregious abuse of power.
He executed a secret subpoenas adventure of phone records of prominent Republicans. He got their phone records and published them in the committee’s 300-page impeachment report.
Now, the report is a work of fiction. Schiff is a liar, and nothing from House Democrats on this whole fiasco should be believed.
This isn’t about the Constitution, or the framers, or the rule of law. It’s not about upholding the integrity of our institutions; Democrats have already perverted those with their deep state antics against this administration.
It’s about the Democratic Party’s inability to grasp that it lost the 2016 election. Democrats wanted to boot Trump since day one of his presidency. The ironic twist is that their impeachment fetish could very well be what secures him a second term. This is not popular in swing states. No one cares. And the liberal media has been so wrong, so stupid, and so corrupt in their coverage of this White House, even Democrats in these states cannot believe what they hear.
But let’s get back to that pencil head, Schiff.
He may have opened himself up to oodles of lawsuits by those he decided to go after with these secret subpoenas. Rudy Giuliani, the president’s attorney, was included in this hit list, and we now have to factor in attorney-client privilege into this whole mess.
Seldom is this cast aside concerning an investigation unless the evidence of wrongdoing is overwhelming.
Schiff decided to ignore those protocols because he wants to boot Trump before the 2020 election, or at least severely damage his re-election chances. It’s funny. The man who says he’s doing this for the country and the rule of law thinks he can break the rules…because he feels he’s right.
What an arrogant, self-righteous little snake, huh?
Wall Street Journal columnist Kimberley Strassel has a good column about how Schiff engaged in gross congressional overreach:
—

Kimberley Strassel
✔@KimStrassel
Also from my column: Constitutional lawyer David Rivkin makes the case that Schiff has opened himself up lawsuits from targets of these subpoenas.
—
Fanatics can justify any action, and House Intelligence Chairman Adam Schiff this week demonstrated where that mindset leads. In his rush to paint Donald Trump as a lawbreaker, Mr. Schiff has himself trampled law and responsibility.
That’s the bottom line in Mr. Schiff’s stunning decision to subpoena the phone records of Rudy Giuliani and others. Mr. Schiff divulged the phone logs this week in his Ukraine report, thereby revealing details about the communications of Trump attorneys Jay Sekulow and Mr. Giuliani, ranking Intelligence Committee member Devin Nunes, reporter John Solomon and others. The media is treating this as a victory, when it is a disgraceful breach of ethical and legal propriety.
If nothing else, Mr. Schiff claims the ignominious distinction of being the first congressman to use his official powers to spy on a fellow member and publish the details. His report also means open season on members of the press. Mr. Giuliani over months has likely spoken to dozens of political figures and reporters—and the numbers, dates and length of those calls are now in Democrats’ hot little hands. Who gets the Schiff treatment next?
[…]
Whatever his role in the Ukraine affair, Mr. Giuliani remains the president’s personal lawyer. Law enforcement must present a judge with powerful evidence to get permission to vitiate attorney-client privilege. Mr. Schiff ignored all that, and made himself privy to data that could expose the legal strategies of the man he is investigating.
Mr. Giuliani did have notice that Democrats wanted some of his phone records. The Intelligence Committee sent a subpoena on Sept. 30, and gave him until Oct. 15 to comply. Yet before Mr. Giuliani even had an opportunity to respond, Mr. Schiff separately moved to seize his records from a phone carrier, sending his subpoena to AT&T on Sept. 30 as well.
Mr. Schiff purposely kept that action secret. This guaranteed that the only entity involved with a decision over whether to release the records was AT&T. And that gave Mr. Schiff all the cards, since companies fear political retribution far more than violating their customers’ privacy.
Well, when it comes to “powerful evidence” to wipe away an attorney-client privilege, this Trump-Ukraine fiasco has none of that. There is no compelling evidence that the president was asking for the Ukrainians to investigate the Bidens’ ties to some of its energy companies or risk having military aid withheld. Ukraine got aid. And all the witnesses who testified before the House Intelligence Committee were career bureaucrats that disagreed with Trump on policy. That’s not impeachable.
Also, this whole circus is grounded in hearsay. Pretty much Democrats didn’t like how Trump spoke to the Ukrainians on a phone call. Also, its star witness, Lt. Col. Alexander Vindman, admitted that the president could legally withhold aid temporarily.
So, what the hell are we doing here, besides being witness to a quasi-coup that’s being pushed by Democrats and members of the anti-Trump deep state?
In the crusade to impeach Trump, Schiff also appears to have abused his power—and it’s all in plain sight. It’s meant to be that way. It’s to show off that he can get away with it.
https://townhall.com/tipsheet/mattvespa/2019/12/06/wsj-columnist-adam-schiffs-covert-subpoena-adventure-shows-democrats-will-do-an-n2557587

The Rise of Young Black Conservatives