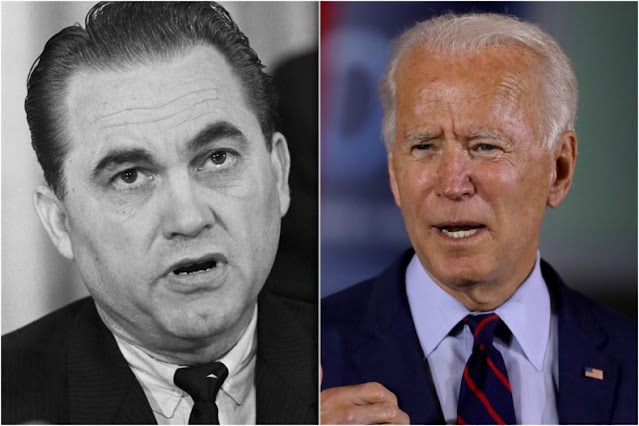 In the past, President Joe Biden praised segregationist Alabama Democrat Governor George Wallace. Photo: Bettmann – Contributor / Chip Somodevilla – Getty Images
The Philadelphia Inquirer reported in September 1988 that Joe Biden, while campaigning in Alabama that year, “talked of his sympathy for the South, bragged of an award he had received from Democrat Governor George Wallace in 1973 and said ‘we (Delawareans) were on the South’s side in the Civil War.'”

“I refuse to enforce any law that eliminates segregation in the South.”

For the 1864 presidential election, to solidify the nation, Republican Abraham Lincoln chose Southern Democrat Andrew Johnson as his running mate. Johnson sojourned through the Civil War incognito which hid his socio-political dark side. But after Lincoln was murdered his loyalty to the Confederacy became obvious when he refused to sign the Republican Civil Rights Act of 1865, and the 13th, 14th and 15th Amendments to the U.S. Constitution.

Not one Democrat in Congress voted for the Civil Rights Act of 1875.

Not one Democrat in Congress voted for the Fourteenth Amendment that granted Blacks citizenship.

Not one Democrat in Congress voted for the Fifteenth Amendment that granted Blacks the right to vote.

Andrew Johnson denounced them as laws that were not in the best interests of the South or of the nation.

The Republican Reconstruction plan was comprehensive. It not only rebuilt the South, it also assimilated former slaves into mainstream American society. This included education, job training, and apprentice programs, as well as helping with Reconstruction. But this never came to fruition. Andrew Johnson chose to allow Southern states to manage Reconstruction with former plantation owners in charge of each county. This enabled them to persecute and isolate Blacks from society.

Jim Crow laws were a collection of state and local statutes passed by Southern Democrats after the Civil War that legalized racial segregation. Named after a Black minstrel show character, the laws existed for ten decades from Reconstruction until 1965. They suppressed Black Americans from voting by subjecting them to numerous, outrageous, unconstitutional laws to register to vote.

They were enforced by segregationists with constant wanton vigilante violence of the worst kind.

In 1916, Democrat President Woodrow Wilson screened “The Birth of a Nation” at the White House that revitalized the Ku Klux Klan, the terrorist arm of the Democratic Party.  Wilson was the embodiment of Democratic progressivism and resegregated previously integrated federal facilities.

“If the colored people made a mistake in voting for me, they ought to correct it.”

In the mid-1960s, Democrat President Lyndon Johnson instigated the break-up of the Black family when he crafted his Great Society with the objective of creating widespread dependency for the benefit of the Democratic Party.

“These Negroes, they’re getting pretty uppity these days and that’s a problem for us since they’ve got something now they never had before, the political pull to back up their uppityness. Now, we’ve got to do something about this; we’ve got to give them a little something, just enough to quiet them down, not enough to make a difference.”

Of the 21 Democratic senators who opposed the 1964 Civil Rights Act, only one would ever change parties. During this era, amid the political upheaval generated by the Vietnam War, the radical socialist Left took infiltrated the Democratic Party. Meanwhile, the Republican Party remained staunchly anti-Communist and opposed to the growing welfare state that Lyndon Johnson embraced and conservatives dreaded.

After passage of the 1964 Civil Rights Act, Democrats worried about losing the South. Lyndon Johnson, recognizing that the realignment of conservatives with the Republican Party had been underway for a long time, informed Democrats that “those states may be lost anyway.”

Democrats today who are soft on crime and generous with welfare argue that disastrous agenda are the best policies for Black Americans. They are engaging in much the same cynical racial calculation President Lyndon Johnson was practicing.

The passage of the 1965 Voting Rights Act made it a federal crime to engage in voter intimidation or threaten someone who is trying to cast a vote. Vote denial, which is preventing a legally eligible voter from exercising his or her constitutional right to vote, is also a federal crime. Any intentional efforts to dilute, suppress, prevent, or deny a single group of people the right to vote is a felony.

With the rise of the progressive movement and the election of Barack Obama, antiquated terms of the past found their way into progressive political dialogue. Progressives resurrected these catch-all phrases to grow, distinguish, control and isolate their flock of identity groups from social reality. This progressive Orwellian “Newspeak” enables them to convolute and distort history’s real facts.

“The aim of Newspeak is to narrow the range of thought so people think your way.”

The term “voter suppression” is an antique buzzword that has been redefined by the left in recent years to label Republicans as “disenfranchising identity groups” with voter ID laws. They say red states are “trying to steal elections” since state voter ID laws make it more difficult for minorities to vote. They are accusing the Republican Party of doing what the Democrats did for 100 plus years.

It took a Republican written law, the 1965 Voting Rights Act, to end voter suppression in the South!

If Democrat Andrew Johnson had worked with Congressional Republicans on Reconstruction, Civil Rights, and enforced the 13th, 14th, and 15th Amendments, It would not have taken a century to end segregation and voter suppression by Southern Democrats. The liberal media is blaming the wrong party for voter suppression.

During Reconstruction, over 2,000 Blacks held local and federal public office. The first 23 US Black Congressmen were Republicans. Despite threats and intimidation from Democrats to keep them from running they refused to be bullied by Southern Democrats and deprived of their rights. It was not until 1934 when unemployed Northern Blacks took advantage of President Franklin D. Roosevelt’s New Deal programs that the first Democrat, Arthur Mitchell, was elected to U.S. Congress from the Northern state of Illinois.

Democrats are so obsessed with hiding the fact that they fostered voter suppression and enforced it with Jim Crow laws, they have written this dark era out of Common Core history books. Young Americans are not taught that the purpose of groups like the Ku Klux Klan and the Louisiana White League and the Knights of the White Camelia were to obstruct and stop all attempts to assimilate former slaves into society. They intimidated and assassinated many Black and White Republicans.

Democrats imposed Jim Crow laws upon freed slaves by manipulating voting qualifications. They established isolated Black voting precincts, gave Blacks literacy tests and charged poll taxes. The Jim Crow laws made registering to vote difficult for Blacks, and the Black only precincts were a well kept secret. In Texas, the Democratic legislature granted itself the authority to invent its own rules. The party announced it was “the party for White voters only,” and excluded Black voters from all elections. This allowed them to dominate elections and suppressed Black and White Republicans.

“It’s a sad day when we are called racist for trying to enforce our state laws.”

The South opposed Reconstruction and the Republican Party’s support of Black civil and political rights. The Democratic Party identified itself as the “White man’s party.” By 1877, the Democrats controlled every state in the South and enforced strict Jim Crow laws to keep Blacks from voting.

The South remained a one-party region until the modern-era Civil Rights Movement began in the 1960s. Most ranking Northern Democrats belonged to “party machines” and turned a deaf ear to the Southern Democrats who still enforced discriminatory Jim Crow laws, and excluded Blacks from their party.

“I refuse to change my ways no matter what left-wingers from any party tells me.”

The consequence of the Democratic controlled South was that most Southern Congressmen were automatically re-elected every election. Due to seniority in the U.S. Congress, Southerners were able to control the committees in both houses of Congress and killed most all civil rights legislation.

Massachusetts Democrat Senator Elizabeth Warren said Kemp did this to prevent his 2018 opponent, Stacey Abrams, a Black woman, from ever running for office again. She called this a “despicable voter suppression bill!”

Democrats conveniently forget the 1965 Voting Rights Act was passed to end voter suppression and protect the constitutional voting rights of all Americans. States that are passing voting ID laws are obligated to do so, to safeguard the vote of every citizen in their state. Since every illegal vote balloted will nullify a legal vote, by ensuring all votes remitted are legal, they are following the provisions of the 1965 Voting Rights Act. “Those guilty of voter suppression are those encouraging illegals to vote.”

Since the new Georgia voting laws were signed into law, Democrats can’t stop calling them “Jim Crow 2.” They are thrilled they found a new way to use the race card for electoral advantage. If voters let Democrats run from their past sins that’s stupidity, but don’t let them blame their sins on the GOP. 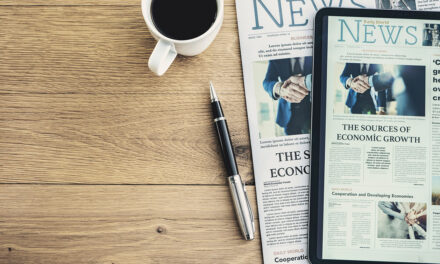 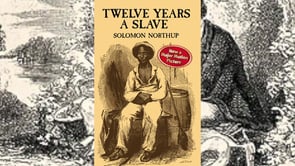 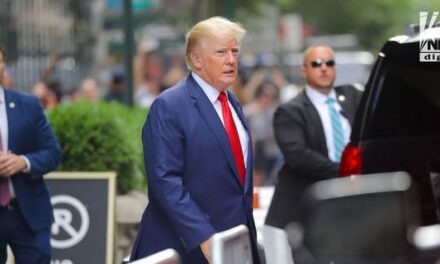 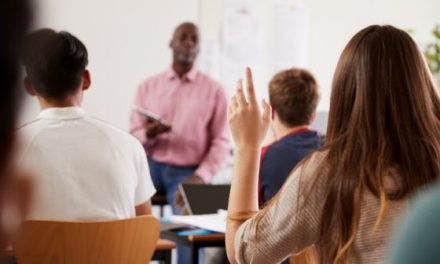