When it comes to the perils of government energy regulation, California easily springs to mind. High energy prices, rolling blackouts and other missteps tarnishing the Golden State’s reputation are indicative of its leaders being “poorly prepared for its self-imposed transition to green energy.”

But it’s not confined to the West Coast anymore. National Center Senior Fellow Bonner Cohen, Ph.D. warns that “‘[i]t can’t happen here’ is one of the most dangerous sentences you can utter.”

A Virginia resident, Bonner points out in a commentary published by The Epoch Times that Richmond lawmakers are making moves similar to those in Sacramento, which could end up causing the same energy problems for East Coast residents like him.

The Virginia legislature passed, and Governor Ralph Northam signed, the “Virginia Clean Energy Act” that mimics California by pushing electric utilities to move solely to “renewable” wind and solar sources by mid-century. Northam also issued an executive order with the ambitious goal of 2,600 megawatts of offshore wind power by 2026.

Bonner notes Northam’s goal may not be possible because Virginia is a “low-wind” state. Similarly, an ambitious and costly wind farm planned for off the Virginia coast is not expected to be ready until at least 2026. With regard to solar panels, one company boasted about putting in 2.5 million more panels over the past five years. That makes it more than one panel per customer!

[A]s California amply demonstrates, the transition to dependence on intermittent wind and solar is fraught with its own perils, which affect both consumers and the environment.

Besides the rolling blackouts, Californians have seen their power bills rise six times more than the national average since 2011. There is also a steep cost of infrastructure and environmental hazard involved with renewable energy production that Bonner called “illusory.”

For example, “[t]he raw materials needed to manufacture wind turbines (installed on land or at sea) far exceed those needed to manufacture and install [natural] gas-fired combined-cycle turbines.” And crucial rare-earth minerals necessary for their operation come largely from China – which has famously poor environmental standards. Sea-based turbines also degrade at a rate of around five percent per year, and those blades cannot be recycled!

It’s a similar situation with solar panels. They are highly toxic, and have a lifespan of around a decade. Surprisingly, “there are no federal regulations governing the disposal of used solar panels, even though they are prone to leakage, in addition to being difficult to recycle. A popular form of solar panel recycling is sending them “to developing countries with weak environmental protections.”

That doesn’t seem very green. Neither does the retirement of large tracts of agricultural land to sprawling wind or solar farms rather than becoming reclaimed wildlife habitat.

Yet liberal politicians have put this all of this on the agenda for Virginia. And Bonner figures the prospects for affordable and abundant electricity in Virginia are more remote than on the other side of the country:

California has far more sun and wind than Virginia. Yet not even those favorable environmental conditions have enabled the Golden State to produce enough energy from either source to meet demand. And their intermittency continues to destabilize the state’s fragile power grid.

Click here to read all of Bonner’s commentary – “California’s Energy Nightmare is Coming to Virginia” – at the website of The Epoch Times. A free digital subscription may be required.

The Epoch Times has a reported circulation of over 1.3 million with 67 different editions in 21 languages. 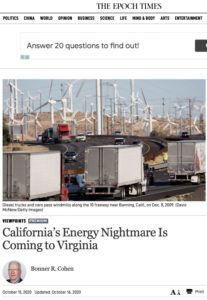 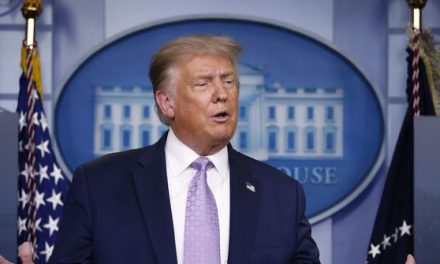