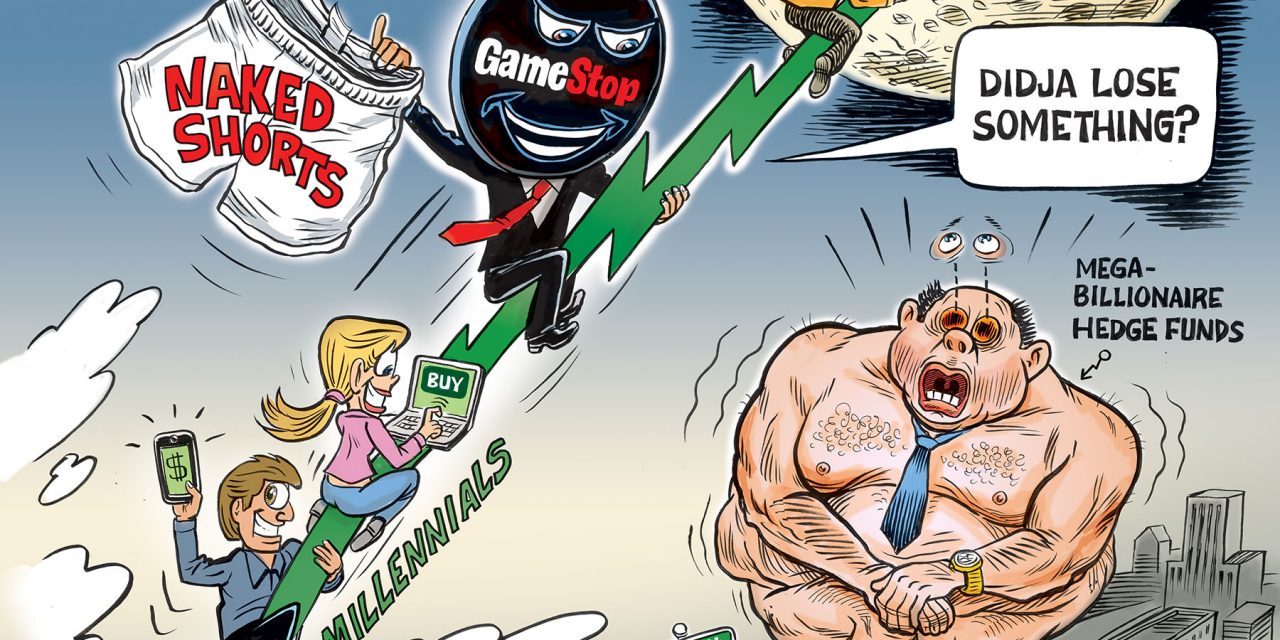 GameStop HAS been stopped. It went up to nearly $500 early this morning, but corrupt brokerages—including Robin Hood—made it harder to buy the stock while also encouraging selling by means of halts and restrictions. In short, the mega-billionaires were able to change their own rules as they went along. The casino is theirs and they always win, even if it means they put their fat thumb on the roulette wheel right in front of your face.

The markets are rigged, just like our politics.
Thanks for playing—you lose!

The plannedemic helped the mega rich get mega richer while the little people got poorer. The biggest global corporations got bigger while smaller businesses were told they weren’t necessary. They were locked down. Many companies struggled was a result. Like weakened animals, they became prey to the powerful wolves that are Wall Street hedge funds. The hedge funds specialize in ‘shorting’ targeted stocks.

A fund ‘borrows’ company shares from brokerages in a process known as ’selling short.’ For example, if you own shares of XYZ Corp., they can be borrowed by a hedge fund and then sold on the spot without you even knowing about it. With enough short selling the price of the stock goes down. The hedge funds eventually buy back the shares at much lower prices and pay back what they borrowed. This is known as short ‘covering.’ They profit by a stock’s decline. The shorts prey on vulnerable companies and hope to drive them out of business. When that happens they don’t even have to cover.

Support cartoons with a one time donation though Pay Pal, help Grrrgraphics Fight the Radical Left and Democrats!

Many investors consider hedge funds to be villains because they destroy companies and jobs. Elon Musk railed against those who shorted his company, Tesla. Some consider shorting to be a form of robbery.

The hedge fund robbers are now complaining about getting robbed. They expected GameStop to go to zero. Instead it quickly went up from a few dollars to over $300 and cost them billions. Not only had they massively shorted GameStop, they were also ‘naked’ short, which means they sold shares they didn’t even borrow. Shares that never existed. How can they pay those shares back? They can’t, and many young people caught onto what was going on. When one of their beloved companies was attacked by the hedge funds, the millennials fought back by buying shares. They spread the news about GameStop on social media sites such as Reddit and 4chan. Many who got in early become millionaires, but many are doing it for another reason: It’s not about money so much as teaching the powerful Wall Street oligarchs a lesson.

The millennials have gotten the short end of the stick. They’re burdened by college debt. They don’t have jobs that pay a decent wage. They’ve been marginalized and treated as inconsequential little people. They have been cut out of the American Dream, while mega-billionaire globalists collect more wealth and power. Yet in this instance the weak and powerless have successfully fought back. What they have revealed is just how rigged and collusive Wall Street has become. So has the regime that recently and blatantly stole a presidential election. The top of the pyramid have revealed themselves to be hopelessly corrupt. They are liars and ruthless con men. They are criminals who don’t have to follow their own rules while they display contempt for the powerless.

Find @GrrrGraphics on GAB.COM Freedom Of Speech! No more Twitter, should be renamed “Snitcher”

The SEC doesn’t care if hedge funds are naked short, which is supposedly illegal. Instead, the regulators want to shut down the ‘longs’ who are buying GameStop. The little people always get the blame. A hedge fund going bankrupt and losing billions of dollars can’t be tolerated, so now it appears that the corrupt brokerages and regulators are going to change the rules midstream—just as the Democrats changed voting rules in key states to steal the election. The corporate media are already blaming those who bought GameStop stock. The little people are accused of ‘manipulating’ the stock. Next they’ll be smeared as ‘financial terrorists,’ when in fact it’s the naked shorting hedge funds who are the real terrorists.

In this instance, the little people have won—even if GameStop is forced back to Earth. What the millennial generation has shown us is just how corrupt and rigged the stock market really is. My hat is off to them. Seeing them win a battle against a powerful and corrupt financial system sure does help morale.

The bad guys can lose and that brings hope. 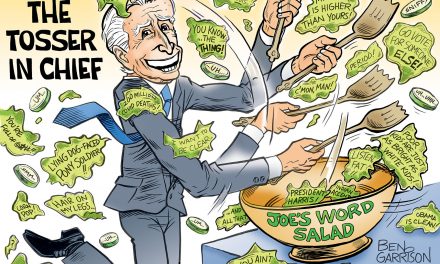 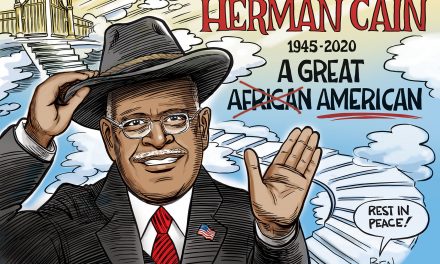 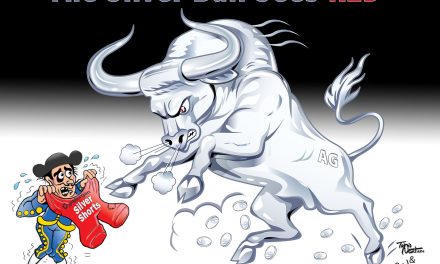