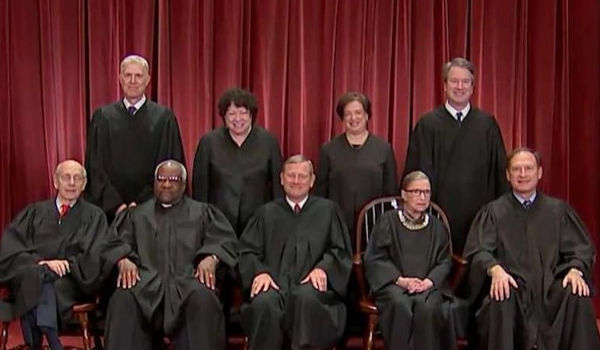 By
Even the liberal justices on the Supreme Court of the United States agree with President Trump on this one. They unanimously handed him a massive 9:0 victory in the fight against illegal immigration. Once again, it is a felony to aid and abet border jumping migrants. Ginsburg was forced to write the decision up for history, which makes the victory even sweeter.
President Donald Trump tapped out one of his iconic tweets on Tuesday, referring to an article in the Epoch Times. It reported that the high court “unanimously resurrected a federal law,” which liberals refused to enforce, making it “a felony to encourage people to come to or stay illegally in the United States.”
“A great time to have strong Borders, and we now have the strongest Borders in our history. 182 miles of Border Wall already built! Dems want Open Borders, let EVERYONE IN. No thanks!” The president posted.
Even hard-core progressives like Ruth Bader Ginsburg were uncharacteristically cooperative. You could practically smell her hair burning as she was forced to write up the unanimous opinion favoring the president. This case was such a flagrant violation of constitutional standards that even she was upset by it.
Uber liberal Ruth Bader Ginsburg was forced to admit that President Trump is right. The 9th Circuit Court of Appeals is totally biased. They decided to create law on their own and it was blatantly obvious. “The appeals panel departed so drastically from the principle of party presentation as to constitute an abuse of discretion,” Notorious RBG wrote in the formal opinion.
Basically, what happened was the 9th Circuit wanted to reach a particular decision, so they took the case away from the parties who filed it, called in outside advocates, and ruled on a separate case that was cooked up to order. That is a serious no-no. “With the appeal poised for decision based upon the parties’ presentations, the appeals panel intervened,” Ginsburg typed. “It ordered further briefing, but not from the parties.” The lower court “committed a serious error” when it sidelined the case “onto a different track.”
“Instead of adjudicating the case presented by the parties, the appeals court named three amici.” That’s a legal term for “friend of the court.” They were a little too friendly. The court practically set up an open bar and snacks when they “invited them to brief and argue issues framed by the panel.” Most importantly, a question the original Defendant herself “never raised earlier.” The whole question of “whether the statute of conviction is overbroad under the First Amendment” was an engineered set up. Just like Michael Flynn’s entrapment.
Evelyn Sineneng-Smith called herself an “immigration consultant.” She set up an office in San Jose, California, and proceeded to get rich by breaking the law. In 2010, back before Trump was even on the scene, she was accused of “duping illegal aliens into paying her fees to file frivolous applications for visas and encouraging them to stay in the country unlawfully.” She was particularly fond of “Filipinos unlawfully present in the United States who worked in the home health care field.”
She exploited a law that was dead for nearly a decade to cheat the illegal immigrants “out of more than $3 million.” She did it “by knowingly filing futile applications after the legal deadline of April 30, 2001.” The expired program was “supposed to lead to permanent resident status.” She was sentenced to a year-and-a-half in jail and appealed.
The law she was convicted under, Section 1324 of the federal Immigration and Nationality Act, says that it’s a felony leading to prison for anyone who “encourages or induces an alien to come to, enter, or reside in the United States, knowing or in reckless disregard of the fact that such coming to, entry, or residence is or will be in violation of law.” That’s good for up to five years in the gray bar hotel, unless it is done “for the purpose of commercial advantage or private financial gain.” In that case, the jail time doubles.
The 9th Circuit didn’t want to enforce it. So they called in their outside friends and wrangled things around until they could argue that the law was “unconstitutionally overbroad” because it “criminalizes a substantial amount of protected expression in relation to the statute’s narrow legitimate sweep.” According to their twisted logic, somehow the law “potentially criminalizes the simple words—spoken to a son, a wife, a parent, a friend, a neighbor, a coworker, a student, a client—‘I encourage you to stay here,’” Even Ginsburg isn’t buying it. She hates to admit it but this time, Donald Trump is right.
Ginsburg was furious when she pointed out that the Defendant never said a word about that in her paperwork. Who’s case is this anyway? “In the ensuing do over of the appeal, counsel for the parties were assigned a secondary role.” Instead of considering “the case presented by the parties,” they invited their friends “to brief and argue issues framed by the panel,” That included “a question Sineneng-Smith herself never raised earlier: Whether the statute of conviction is overbroad under the First Amendment.”
The so called friends were “Federal Defender Organizations of the Ninth Circuit, along with two left-wing activist groups — the Immigrant Defense Project, and the National Immigration Project of the National Lawyers Guild. The NLG has longstanding ties to the Communist Party USA,” Epoch Times informs.
Dan Stein, president of the Federation for American Immigration Reform agrees with President Trump, noting that the court was right to address “the institutional integrity of the judiciary and its proper role in our tripartite system of government. There is a point beyond which politicized judges, many appointed by President Obama, may not go.” He also added, “courts are not super legislatures that have the right to substitute their own political and policy judgments for those of elected representatives based on a whim.”
https://newspushed.com/president-trump-wins-another-massive-scotus-case/