I wrote “It’s OK to Leave the Plantation” because we have only two choices: remain on the Plantation or leave it. If you stay, you will have handouts, low wages, drugs, gangs and no opportunities. If you leave the Plantation, Master will not like you, the slave managers will not appreciate you, and your slave relatives will no longer communicate with you. But you will be free.

If opportunity is expanding, business startups are growing and new technologies are being invented, why aren’t black people, as a culture, participating and energized by this development? Instead, the black community continues to beg for benefits, safe places and protection from white people.

Instead of worrying about statues we should be celebrating black families, education, jobs and success. Instead of marching for minimum wage, we should be working towards maximum wage.

Are the few banks, grocery stores and technology businesses in black neighborhoods due to racism, or the crime rate? If you don’t want to take jobs, why would anyone create a job in your neighborhood? Is it racism, or sound business? If you have a tendency to riot and loot when things do not go your way, why would I put a business in your way?

If you see the need for businesses in your community, start one in your community. If the Arabs own all the liquor stores, Koreans all the beauty supply stores and the Latinos all the gas stations, it is not the white man’s fault. It is the black man’s fault. Stop being a consumer and start being an investor. Buy Nike stocks with your Nike shoes.

Is the problem racism or is the problem us, black people? If we keep acting like adolescent children and stop treating white people like they are superior, stop insisting on being taking care of, then maybe it will change. Someone else saw the potential in your neighborhood, someone else saw the need to invest – why not you? Instead of demanding to be served, try serving your neighborhood. He who serves best, lives best. Don’t ascribe to the belief that the only businesses we can own in our neighborhoods are the barbershop and the nightclub. It is up to us to have failure or success.

Stop supporting the culture given to us. Entertainers portray blacks as angry, criminals, women-haters and sexual predators. We support singers who reflect us as drug dealers and pimps. We allow our children to attend schools that turn out slaves, not citizens – and then we demand better treatment on the Plantation.

You may believe there is a debt due you because of slavery. After World War II, Germany and Japan owed America a lot. But instead of demanding payment, we rebuilt both countries so we could trade with them. We now have received far more from them in trade than we could have ever hoped for otherwise. If we blacks forgave the debt of slavery, we would take our rightful place in America.

I was having breakfast at a restaurant when a black man came in looking for an employment application. The store owner was obviously disturbed by his request, but reluctantly gave him one. As I enjoyed my meal, I asked him if he really thought the owner was going to hire him. He said no, he would not hire him because it was obvious by his reaction that he does not like black people.

I told him that the reason the owner would not hire him is because “I” would not be eating there if he worked there looking like that. Dirty long braids, pants showing his underwear, dirty shirt … and it was clear he just woke up. The owner was more interested in me and the other customers than employing this young man. Was it racism, or good business?

Black people have great opportunities to reject the cultural habits forced upon us by the old slave Master and join the American culture we help form. Let’s raise our children to compete, teach them manners, workable dress codes, common courtesy and get rid of that chip on our shoulders.

People treat you different sometimes because you are acting crazy, being rude or they are having a bad day. It is seldom due to your skin color.

What a great time to ignore “White Privilege” and embrace the “American Privilege,” and make it a pledge to our ancestors who suffered hoping for this day and these opportunities. Speak English because it is the international language of business and success. Reject to old slave slang we used as a secret language, and no more secrets. We are no longer slaves.

Families were discouraged, education was illegal, and freedom had no life on the plantation. This is a great time to do what our ancestors feared to dream of, regardless of who did not like it. Yes, many will not want you to be successful, and many will conspire against you. It is not due to your skin color, it is due to the competition for those resources.

There is nothing white people have stopped us from doing if we thought we could achieve it. 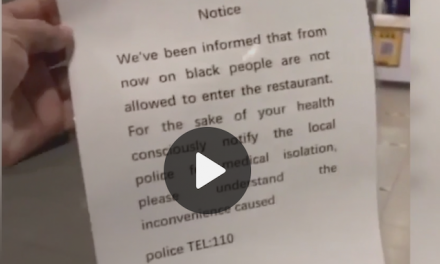 (Video) What the heck is an “ALPHA FEMALE?”

How The Left Is Stealing Your Church