Democrats are looking for a new 2018 slogan. I’ve got the perfect one. “Elect Us! We Resisted You!”

The party of delay, opposition, resistance and slander is going down in 2018 and in 2020. Only Republicans could keep the Democrats from suffering total defeat.

I am not surprised nor dismayed at the failure of the Republicans in repealing Obamacare. Let’s take a political look at their situation.

When the GOP won over Democratic districts, those newly elected congressmen were not secure in their districts. The Democrats often still hold a majority of voters and are usually better organized. Many of these victories were the results of lower Democratic voter turn out. What if they showed up next election? The GOP doesn’t consider them safe seats and often do not put a lot of money into holding those seats.

A freshman Republican House member from a Democratic district cannot be depended upon to toe the conservative line on all issues. We can look at it as trying to cover their own behinds or as trying to maintain the Republican control of Congress.

So I looked at the numbers in the House and Senate and can understand some of the blow back on taxes and Obamacare with these marginal seats. What is the political solution? It will be hard for Republicans to gain more strong House seats in 2018. We already have most of the safe ones.

However, President Trump proved one thing: You can swing Democrats to our side, if you talk to them and not surrender them to the liberal lies.

These representatives cannot be counted on until we can convert more districts, and the party doesn’t seem eager to wage that battle. That means we must do it for them.

Republicans have enough safe seats in the House to let those in Democrat-leaning districts sit out a tough vote. This is why the House easily passed their version to replace Obamacare even with 20 Republicans voting against the bill.

Most of these Republicans were from those Democratic districts and needed cover. We must give them a pass. Keeping control of the budget and committee chairmanships is very important. And don’t forget those congressional investigations.

In Missouri, Republicans won every statewide office, and Trump carried it by 19 points. Liberal Democrat Sen. Claire McCaskill is in serious trouble there and probably will be replaced with a strong Republican. Overall, Democrats have 11 senators whose races I would handicap as a tossup or in danger.

I would not be surprised if they lost eight Senate seats, including McCaskill in Missouri, Tammy Baldwin from Wisconsin, Heidi Heitkamp of North Dakota, Jon Tester from Montana and Joe Donnelly of Indiana. All of them will have hard races. With any kind of help from Trump campaigning, Republicans have a good chance of reaching the 60 vote threshold to control the filibuster. But will it be enough of a cushion to nullify those senators from weak Republican states?

The only way we can continue the march toward complete “conservative” control over the Senate is by working hard to elect them in strong Republican states. I will make a personal effort in Missouri – you guys pick your own battles.

Choose your candidates early, before the party chooses. Work for them, raise money for them, and let’s get the warriors elected. Nov. 8, 2016 was not a victory; it was only our entrance into a long battle to bring America back to her core values. The only victory from this election was winning the right to fight for America.

It cannot be about Trump. It has to be about us. We wanted the fight, and we have it. If America is going to be great again, it has to start and end with us.

Keep winning – we have them on their heels. I do not call any Republican a RINO. I understand the restraints. We have the power, we have the momentum, and we are right.

Winning these Senate races will open new plugs to drain the swamp. This is why the media are trying to discourage us. All this news about Republican disagreements, infighting and the party falling apart is only an attempt to depress us. We are winning, and they are scared.

Nothing they have tried is working, and soon we will be in total control of the government. And the people will prosper again. But this battle will require our generation to sacrifice in order to win for the next generation. We must be the sacrificial generation. Our children’s freedom rests on our shoulders. It will be decades of struggling; however, our children will benefit. 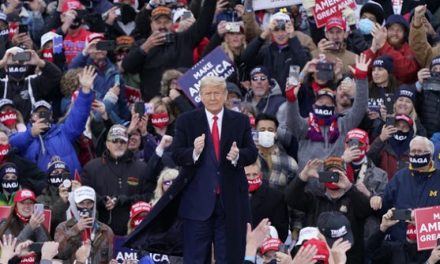